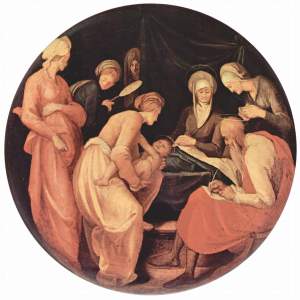 Another canticle, perhaps less well-known than Mary’s song, is the Benedictus of Zechariah (recorded in Luke 1:68-79). This has not garnered the extensive musical treatment that the Magnificat has, but American composer Dan Forrest recently wrote a moving anthem on this text, with additional original lyrics by R. C. Sproul (listen to a recording here). During the month of December, as the days become shorter and much of the natural world enters a period of dormancy, take a moment to reflect upon Zechariah’s promise of light and life.

Not long before Jesus was born, the angel Gabriel appeared to Zechariah, a priest, and gave him a wonderful promise—he and his wife Elizabeth would have a son named John, who would prepare people for the coming Messiah. John would preach judgment for sin and call people to repentance. Because he and Elizabeth had no children and were very old, Zechariah knew this would take a miracle, and he could not believe it (Luke 1:18). And because of Zechariah’s unbelief, the Lord removed his ability to speak. When it was time to name his son, Zechariah could not fulfill his fatherly obligation to name the child. Instead, Elizabeth said to call him John. But their relatives were confused—why not name the boy “Zechariah,” according to custom? Finally, Zechariah wrote “His name is John” on a tablet, and after this the Lord restored his speech. What he said next is a Spirit-inspired prophecy abounding in thanksgiving and praise to God, the Redeemer. He recounts many of God’s actions in redemptive history, he acknowledges John’s role in preparing people for the Lord’s forgiveness, and he recalls God’s promise of light to those enslaved by the darkness of death—“the sunrise shall visit us from on high.” The prophet Malachi, to whom Zechariah refers, first spoke of this “sun of righteousness” (Malachi 4:2). What a beautiful picture of the Messiah bringing light to the dark places of our lives. This promise of light finds its fulfillment in the one who referred to himself as “the light of the world” (John 8:12). Through his Son, God offers light to those living through the darkest of circumstances, and he offers life to those walking through the valley of the shadow of death. This is good news! (adapted from Behold He Comes: Advent Reflections)

Choral Settings of the Benedictus

Benedictus in A, J. Goss | Difficult (SATB, a cappella)