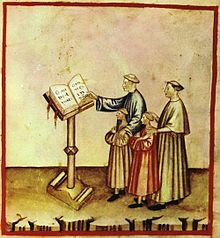 In an article that appeared online in The Atlantic (March 28, 2012), Karen Loew notes the only time most Americans sing communally is during a baseball game’s seventh-inning stretch when the crowd stands and sings “Take Me Out to the Ballgame.” (Red Sox fans, of course, have the added privilege of singing Neil Diamond’s “Sweet Caroline” during games at Fenway Park.) People sang together in the past, but communal singing has virtually disappeared from today’s society. Americans do not sing together in public, yet when they go to church they are expected to join in the singing of hymns, responses, and other songs. What a peculiar, old-fashioned thing to do! While Loew acknowledges certain types of music-making continue to thrive in America (“Folks sing in religious settings as much as ever”), it is worth considering: exactly why do Christians engage in the counter-cultural practice of group singing during their worship services?

First, scripture directs Christians to sing. The opening verses of Psalm 100 are familiar to many: “Make a joyful noise to the Lord, all the earth! Serve the Lord with gladness! Come into his presence with singing!” (Ps. 100:1-2). Have you ever heard a churchgoer rightly claim these verses as his or her excuse for poor vocal technique? “The noise I make may not be pretty, but at least it’s joyful!” In Psalm 33:3 the psalmist tells the righteous to sing “a new song” to the Lord, and in Psalm 150:6 “everything that has breath” is instructed to praise the Lord with music. The Apostle Paul writes, “Let the word of Christ dwell in you richly, teaching and admonishing one another in all wisdom, singing psalms and hymns and spiritual songs, with thankfulness in your hearts to God” (Col. 3:16). Christians strive to live according to biblical precepts, so they sing together in worship because scripture tells them to do so.

Second, the people of God have always responded to God’s redemptive acts by singing songs of thanksgiving and praise to God. Their modus operandi—or, if you like, part of their DNA—is to praise God for who God is (attributes) and what God has done (actions). After the Israelites crossed through the Red Sea, a miraculous picture of God’s saving power, Moses and Miriam led the people in this song: “I will sing to the Lord, for he has triumphed gloriously; the horse and his rider he has thrown into the sea. The Lord is my strength and my song, and he has become my salvation” (Ex. 15:1-2a). When faced with the unexpected working of God in her life, Mary responded with a song of praise, recounting God’s goodness and faithfulness (Lk. 1:46-55). Paul and Silas, trusting in God’s provision in spite of their present reality, sang together while imprisoned (Acts 16:25-40). And, even now, saints around the throne of God sing this eternal song: “Worthy are you, our Lord and God, to receive glory and honor and power, for you created all things, and by your will they existed and were created” (Rev. 4:11). Today’s Christians follow the example of saints from the past, lifting their voices in harmony to the God who has delivered them from the bondage of sin and death.

Third, singing reflects Jesus’ character. Only days before his death, Jesus celebrated the Passover with his disciples. And he did so in a way that forever changed the meaning of that supper: he said “this is my body…this is my blood” (Mk. 14:22-25). As part of the ritual, he and his disciples recited the Hallel, which quotes the Israelites’ song from Exodus 15 (see Ps. 118:14). Again, he reframed an important aspect of that holy day; in effect, Jesus was saying, “I have become your salvation.” Then, they sang a hymn together (Matt. 26:30). And, Jesus has not stopped singing. The “founder of salvation” now sings with his brothers and sisters—God’s children in glory—about the unsurpassed grace of God: “I will tell of your name to my brothers; in the midst of the congregation I will sing your praise” (Heb. 2:12).

Christians sing communally, not simply because scripture tells them they should, though for some this may be reason enough. Christians sing, too, because they share an experience of deliverance. This is captured succinctly in the title of Robert Lowry’s hymn “How Can I Keep from Singing?” which aptly describes Christians’ worship-filled response to God’s saving work in their lives. What is more, the God of Christianity is a God who delights in singing over the redeemed: “he will rejoice over you with gladness; he will quiet you by his love; he will exult over you with loud singing” (Zeph. 3:17). When Christians sing in worship, their voices become part of God’s ongoing love song—what an awe-inspiring thought!